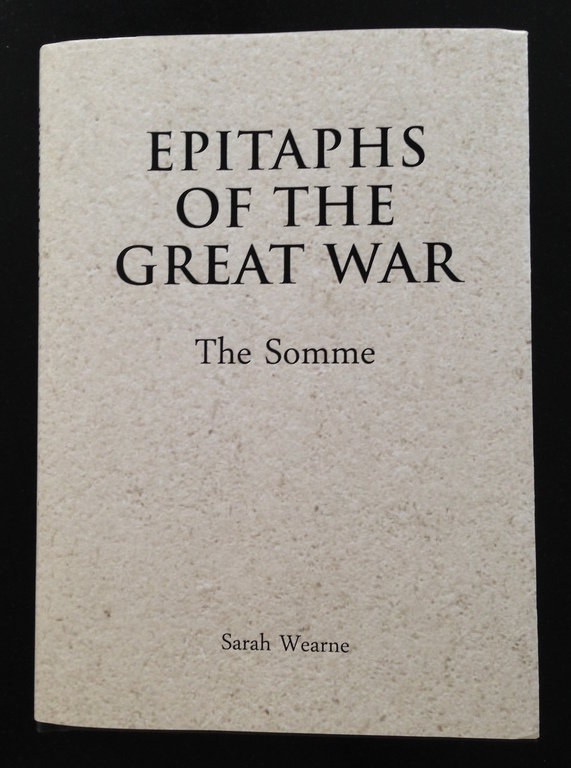 If you think Twitter’s 140-character rule restrictive, the families of those killed in the First World War had a mere 66 to compose an inscription, an epitaph, for their relation’s headstone. Throughout the centenary, @wwinscriptions will publish some of these thousands of inscriptions, revealing a voice that has not been heard before, the voice of the bereaved. A voice that speaks of love, sorrow, pride, grief and despair, it quotes the bible, literature, hymns and popular songs, and it tells us something about the dead, who they were, where they lived, what they looked like and how they died.

All the epitaphs posted so far

In many cases the epitaphs use a language most of us don’t speak any more and by this I don’t mean the French, Latin, Welsh, Gaelic or Africaans that some relatives used, but the allusions and references that one hundred years ago were familiar to everyone. Who now recognises the quote, “The hours I’ve spent with thee dear heart are as a string of pearls to me” as coming from the number one best seller of Edwardian England, Florence L Barclay’s The Rosary, that “Go stranger tell our people we lie here having obeyed their word” references the Battle of Thermopylae in 480 BC, or that the simple dedication “Duty nobly done” is an acknowledgement of King George V’s letter to the Expeditionary Force on the eve of its departure for France – “I have implicit confidence in you my soldiers. Duty is your watchword, and I know your duty will be nobly done”?

Bear in mind that the repatriation of bodies had been strictly forbidden, after May 1915 no one was allowed to bring a body home from the battlefields and the ban remained in force even when the war was over. And when the war was over, families were not allowed to choose their own headstones they had to accept the uniform headstone chosen by the War Graves Commission for all the war dead. Whatever the merits or demerits of these decisions – the cause of much public distress despite the fact that today the cemeteries are universally admired for their quiet dignity and restraint – they were final. This meant that choosing an inscription was not just the last contact families had with their dead but the only contact they had with them. This gave them huge significance.

These inscriptions have been collected over more than 30 years of visiting battlefield cemeteries as well as some from John Laffin’s Australian Epitaphs of World War 1 (1995), Trefor Jones’ On Fames’s Eternal Camping Ground, Epitaphs in the British Cemeteries on the Western Front (2007), and from the recently uploaded records of the Commonwealth War Graves Commission.

This is a stub. Many boys lied about their age to get into the army. Sometimes their families highlighted this in the inscription they chose, sometimes the fact only emerged from research into their backgrounds.

END_OF_DOCUMENT_TOKEN_TO_BE_REPLACED

This is a stub entry – there is more to come

END_OF_DOCUMENT_TOKEN_TO_BE_REPLACED

The Poetry of Elizabeth Barrett Browning and Robert Browning

Despite the fact that Elizabeth Barrett Browning’s poetry was better known than her husband’s during her lifetime, it is his poetry that appears more frequently in headstone inscriptions. [This is a stub]

END_OF_DOCUMENT_TOKEN_TO_BE_REPLACED

This is a stub – more later Personal inscriptions quoted songs from the eighteenth-century Jacobite Revolution, the American Civil War, the British Music Hall and at least one musical from Jerome Kern. Click on the associated posts to see these inscriptions

END_OF_DOCUMENT_TOKEN_TO_BE_REPLACED

The works of William Shakespeare were a popular source for inscriptions with Julius Caesar, Hamlet, Anthony and Cleopatra, Henry V and Macbeth probably being the most popular. People sometimes ask me if there is a difference between the inscriptions chosen by officers’s and soldiers’ families. As I say in Private William Walls’ inscription, whilst officers’ […]

END_OF_DOCUMENT_TOKEN_TO_BE_REPLACED

On the idle hill of summer, Sleepy with the flow of streams, Far I hear the steady drummer Drumming like a noise in dreams. Far and near and low and louder On the roads of earth go by, Dear to friends and food for powder, Soldiers marching, all to die. East and west on fields […]

END_OF_DOCUMENT_TOKEN_TO_BE_REPLACED

Wikipedia gives the total number of British soldiers killed along a twenty-mile stretch of the frontline on 1 July 1916, the opening day of the Somme campaign, as an exact 19,240. But it doesn’t really matter whether this figure is exact or not, it is enough to know that almost twenty thousand men were killed, […]

END_OF_DOCUMENT_TOKEN_TO_BE_REPLACED

Alfred, Lord Tennyson, 1809-1892, was and remains one of Britain’s favourite poets. He is the ninth most quoted author in the Oxford Dictionary of Quotations so it’s not surprising that he is the source of many headstone inscriptions. Perhaps the one that appears most regularly comes from The Ode on the Death of the Duke […]

END_OF_DOCUMENT_TOKEN_TO_BE_REPLACED

To go straight to the epitaphs Between 25 April 1915 and the 9 January 1916 somewhere in the region of 149,000 men died on the Gallipoli peninsular. While the number of the dead from the British Empire and Commonwealth is generally accepted to be fairly accurate, those from France and the Ottoman Empire (Turkey) are […]

END_OF_DOCUMENT_TOKEN_TO_BE_REPLACED

Like many bereaved parents, Roland’s mother wrote a memoir of her son, but hers was completely unlike any other that was published. Called ‘Boy of My Heart’, it looks exactly like a novel. The dust jacket has an idealised sepia sketch of a handsome young man in uniform, and the hard cover is embossed with […]